Katy Perry loses lawsuit against Christian Rapper Flame and will have to pay damages. According to a jury in California her song "Dark Horse" released in 2013 infringed upon Flame's song "Joyful Noise" released in 2008. The settlement process will start 7/30/2019

Marcus Gray, AKA Flame, and co-writers Emanuel Lambert and Chike Ojukwu of his track Joyful Noise sued Perry and five other producers and songwriters who worked on Dark Horse. The lawsuit was filed a year after the release of "Dark Horse" which eventually became one of Katy's biggest hits and her 9th #1 single.​ 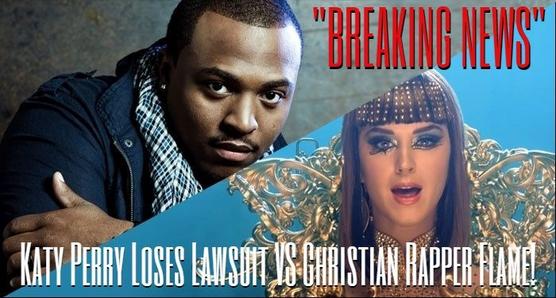 According to "Rapzilla" FLAME’s DJ at the time, Cho’zyn Boy, was notified of the similarities. He pulled the files of both songs and broke them down and played them side-by-side and on top of each other. Listen for yourself and let us know your thoughts..

UPDATE: The verdict is in and "Flame" was awarded 2.78 million for the infringement on his song by Katy Perry.