6 Now it happened [a]on the second Sabbath after the first that He went through the grainfields. And His disciples plucked the heads of grain and ate them, rubbing them in their hands. 2 And some of the Pharisees said to them, “Why are you doing what is not lawful to do on the Sabbath?”

3 But Jesus answering them said, “Have you not even read this, what David did when he was hungry, he and those who were with him: 4 how he went into the house of God, took and ate the showbread, and also gave some to those with him, which is not lawful for any but the priests to eat?” 5 And He said to them, “The Son of Man is also Lord of the Sabbath.”

Healing on the Sabbath

6 Now it happened on another Sabbath, also, that He entered the synagogue and taught. And a man was there whose right hand was withered. 7 So the scribes and Pharisees watched Him closely, whether He would heal on the Sabbath, that they might find an accusation against Him. 8 But He knew their thoughts, and said to the man who had the withered hand, “Arise and stand here.” And he arose and stood. 9 Then Jesus said to them, “I will ask you one thing: Is it lawful on the Sabbath to do good or to do evil, to save life or [b]to destroy?” 10 And when He had looked around at them all, He said to [c]the man, “Stretch out your hand.” And he did so, and his hand was restored [d]as whole as the other. 11 But they were filled with rage, and discussed with one another what they might do to Jesus.

12 Now it came to pass in those days that He went out to the mountain to pray, and continued all night in prayer to God. 13 And when it was day, He called His disciples to Himself; and from them He chose twelve whom He also named apostles: 14 Simon, whom He also named Peter, and Andrew his brother; James and John; Philip and Bartholomew; 15 Matthew and Thomas; James the son of Alphaeus, and Simon called the Zealot; 16 Judas the son of James, and Judas Iscariot who also became a traitor.

17 And He came down with them and stood on a level place with a crowd of His disciples and a great multitude of people from all Judea and Jerusalem, and from the seacoast of Tyre and Sidon, who came to hear Him and be healed of their diseases, 18 as well as those who were tormented with unclean spirits. And they were healed. 19 And the whole multitude sought to touch Him, for power went out from Him and healed them all.

20 Then He lifted up His eyes toward His disciples, and said:

27 “But I say to you who hear: Love your enemies, do good to those who hate you, 28 bless those who curse you, and pray for those who spitefully use you. 29 To him who strikes you on the one cheek, offer the other also. And from him who takes away your cloak, do not withhold yourtunic either. 30 Give to everyone who asks of you. And from him who takes away your goods do not ask them back. 31 And just as you want men to do to you, you also do to them likewise.

A Tree Is Known by Its Fruit

Build on the Rock

46 “But why do you call Me ‘Lord, Lord,’ and not do the things which I say? 47 Whoever comes to Me, and hears My sayings and does them, I will show you whom he is like: 48 He is like a man building a house, who dug deep and laid the foundation on the rock. And when the flood arose, the stream beat vehemently against that house, and could not shake it, for it was [j]founded on the rock. 49 But he who heard and did nothing is like a man who built a house on the earth without a foundation, against which the stream beat vehemently; and immediately it [k]fell. And the ruin of that house was great.” 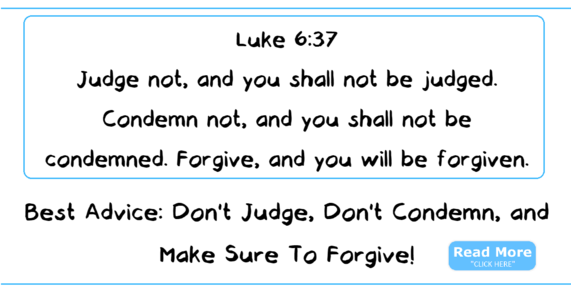