He is survived by his wife Vanessa, and four daugthers – Natalia, Bianca and their new born Capri.

His last tweet seen below speaks to his amazing character as he gave props to his friend Lebron James as he passed Kobe on the all time NBA scoring list!

Please join in and pray with us for his family and friends left behind and that God would continue to use him as an amazing influence for generations to come.

KOBE MAY YOU REST IN HEAVEN MY BROTHER

UPDATE: Early reports showed 5 people on board, however it has been confirmed that nine people were on board including Bryant's 13-year-old daughter Gianna. Prayers for all please! 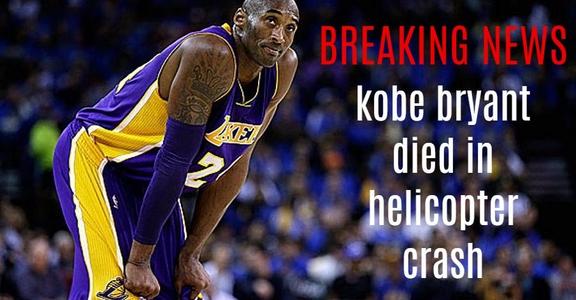 It was reported that Kobe Bryant (age 41) has been killed in a helicopter crash earlier this morning, according to a  TMZ Sports report.

The Basketball icon was travelling with 3 other people in his private helicopter when a fire started, sending the chopper down in flames.

When the emergency crew reached the spot of the crash they confirmed there were no survivors. At least 5 people have been killed as a result of the crash.

Kobe has loved helicopters and has been using them for years. Sometimes he was seen coming to the stadium in Las Angeles in his private helicopter.

Continuing to move the game forward @KingJames. Much respect my brother 💪🏾 #33644