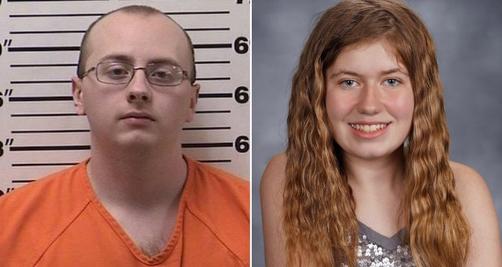 Police got to kidnapped Wisconsin girl Jayme Closs before her alleged abductor could hunt her down.

Jake Thomas Patterson — who was arrested for allegedly murdering the 13-year-old’s parents and then holding her captive for three months until she escaped Thursday — was driving around looking for the girl when authorities nabbed him, officials revealed Friday.

“The suspect was not at home when Jayme escaped. While I don’t know how she escaped at this time we believe that the suspect was out looking for her when law enforcement made contact with him,” Barron County Sheriff Chris Fitzgerald said at a press conference.

Patterson, 21, was nabbed Thursday based on a description Closs gave of his car — not long after she escaped the cabin where she’d been held captive in the small town of Gordon and approached a stranger and pleaded for help.

“Jayme is the hero in this case, there is no question about it,” Fitzgerald said. “She is the one that helped us break the case along with everybody else that worked on it.”

Fitzgerald reiterated that authorities believe the teen — and not her parents — was the suspect’s intended target when he blasted into their home on Oct. 15 with a shotgun, although it’s still unclear if or how he actually knew her.

“At this time nothing in this case shows the suspect knew anyone at the Closs home or at any time had contact with anyone in the Closs family,” the sheriff said, adding that he worked for the same turkey plant as her parents for a day years ago, but they had no contact.

“The suspect had intentions to kidnap Jayme and went to great lengths to prepare to take her.”

He also went to “great efforts” to avoid leaving any traces of himself at the crime scene, Fitzgerald said — including shaving his head so he wouldn’t leave hair behind.

Closs has been speaking with authorities after spending Thursday night in the hospital, but Fitzgerald said they’re not looking to “put pressure” on the teen or her family.

“We want to let Jayme settle in and take care of her,” he said when asked for more details on what had happened to her at the cabin.

Patterson will be arraigned in court on two counts of first-degree intentional homicide and one count of kidnapping.

Article By By Ruth Brown with the New York Post

Kidnapper was trying to hunt Jayme Closs down after her escape: cops